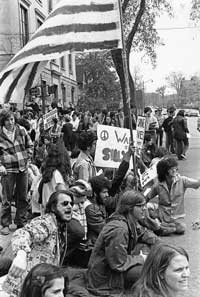 As we saw last week with Tori McDonough’s lesson plan, oral history can be a valuable tool in the classroom. While her lesson focused on having students conduct their own mini oral history projects in order to gain an understanding of the historical thinking process, I will be focusing on using oral histories to introduce a topic and provide a point of reference and relatability for students.


This lesson plan addresses the following standard from the Ohio Department of Education’s model curriculum for American History:

This lesson focuses on the social and political impact the antiwar movement had on American society during the Vietnam War. The story of the Case Western Reserve University (CWRU) campus-wide protest as told by John Grabowski not only serves as an example of the antiwar movement but also provides a local and relatable experience for students to latch onto. Students’ proximity in age to Grabowski at the time of the story allows them to see history from a contemporaneous viewpoint. Pairing Grabowski’s account with visual elements such as copies of protest flyers and photos from the Case Western Reserve University archives can provide an impactful introduction to the antiwar movement. Further, utilizing visual material broadens the definition of historical documentation by going beyond the text and provides students with another avenue of research possibilities.
The full lesson plan is available as a PDF file: American Society and the Vietnam War Lesson Plan.pdf
Stay tuned to Social Studies @ CSU as Tori and I continue our series of Model Lesson Plans. If you have comments, questions, or input on using oral histories in the classroom, feel free to leave them in the comments below or find me on twitter @CPMorris13.

3 thoughts on “Lesson Plan: American Society and the Vietnam War”