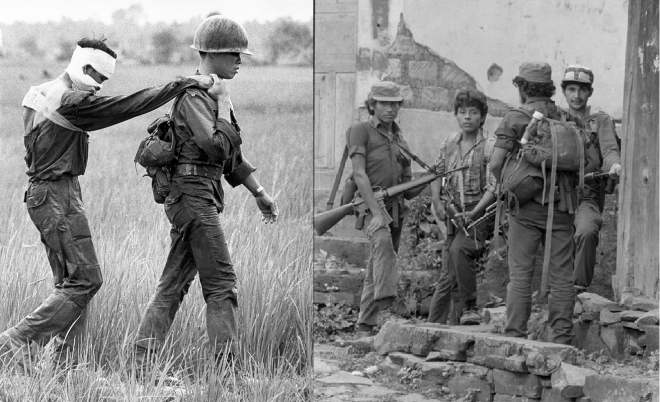 This summer I tackled two very contentious topics in Cold War history: the El Salvador Civil War and the Vietnam War. For lack of a better term, I dove headfirst into the madness of both wars. While I was researching these conflicts, I was also surveying the Protest Voices series in the Cleveland Regional Oral History Collection. Therefore, my research involved unearthing historical truths concerning each part of the world and their ties to communism, class struggle, Cold War politics, nationalism, Russian influence, the Catholic Church, the Red Scare, and geopolitics. I must say, it was a very daunting task.

After reviewing countless sources, I arrived at some conclusions.

I came to these conclusions through careful research and study of both wars, and by no means are these the definitive takes on both wars. Personally, I wished that I spent more time looking at the Vietnam War because although both wars were complex, in Vietnam there were many more actors in the conflicts – Viet Cong, United States military, North and South Vietnam, and for a time the French. Therefore, I encourage you all to pursue more research and I recommend some of the sources about the Viet Cong listed in this website.

Simultaneous to my background research this summer, I began arranging secondary social studies teaching materials. In my construction of these materials, I combined sources on background knowledge with audio clips made from interviews from the Cleveland Regional Oral History Collection. My biggest challenge was finding the intersection between ease of use by educators, perceived interest to students, coherent themes, and alignment to Ohio Department of Education Standards. I encourage you to check out some of my work, and that of previous research assistants, on History Speaks. I believe the clips and lesson plans I produced this summer will aid educators who want to immerse their students in the voices of the actors of history, and therefore I am very proud of my work.

Have a great school year!