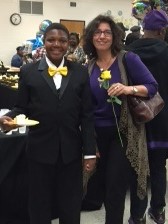 We are pleased to feature Director of Graduate Studies Dr. Karen Sotiropoulos as our August Faculty Spotlight! Karen Sotiropoulos is Associate Professor of History and Director of Graduate Studies at Cleveland State University where she has taught African American History since 2000. She earned her BA from Tufts University, MA from New York University, and PhD from the City University of New York (CUNY).
Sotiropoulos is the author of Staging Race: Black Performers in Turn of the Century America (Harvard, 2006) and co-editor of several issues of the Radical History Review including Transnational Black Studies (2003), Haitian Lives/Global Perspectives (2013), and Women, Transnationalism and Human Rights (2008) for which she authored the essay “Open Adoption and the Politics of Transnational Feminist Human Rights.” Her most recent publication is “Town of God: Ota Benga, the Batetela Boys and the Promise of Black America,” Journal of World History v. 26, (2015). She is working now on an article that addresses how African nationals who have studied in the US addressed issues of race and liberation in the early 20th Century. She lives in Cleveland Heights with her son Lanell and their dog Shea. HIS 215: History of African Americans to 1877 *
HIS 216: History of African Americans since 1877
HIS 329: Black Resistance in the Age of Jim Crow *
HIS 325: Black America Since 1945 *
HIS 318: Black America and Africa *
HIS 601: Introduction to Graduate Study in History
HIS 621: Readings in Black History
(* = counts toward SST major)
What are your primary academic research and teaching areas?
African American, black transnationalism, African Diaspora, Afro-futurism (or Re-imagining the US and the World through the Future of a Black Past)

How do you incorporate these interests into your social studies and/or history courses at CSU?
My teaching has always mirrored (and inspired) my scholarship and my three upper division courses directly reflect these interests. “Black America and Africa” historicizes constructions of race in America by looking at black America’s imaginings of Africa from the throes of the Atlantic trade in African human beings to the paternal lineage of President Obama. Black America since 1945 or what I call “The Black World and the Cold War” looks closely at black America’s relationship with Third World formations over the course of the 20th century. “Black Resistance in the Age of Jim Crow” looks at the legal status of African Americans and the criminalization of black lives, as well as how black Americans engaged with political movements around the world. My research has helped me bring a global lens to all of my classes, so that even when I teach the second half of the African American history survey, I frame it so that students think about the time and space of black America – a history stretching back to the beginning of the Atlantic trade and including ongoing connections to Africa, the diaspora and the world. This history forces students to reconsider the time and space of American freedom as they look through the lens of enslaved Africans and their descendants, and it encourages them to imagine a future where freedom exists for all.

How do you use primary sources, off-campus resources, or technology in your courses?
I never thought I’d be so attached to my ipad! Images images images and video clips at my fingertips! Students today may never quite understand the boon that it is to be able to quickly bring up a picture or a clip as class lectures/discussions develop (rather than planning ahead of time for the showing of a DVD or VHS). These images and videos are some of the ways I draw on primary sources for my classes, but all of my students are asked to analyze written primary sources as well – in class, on papers, and for essay exams.
All of the students in my large survey courses are required to attend some event outside of class, either on- or off-campus. These events range from seeing Angela Davis speak at CWRU in 2015 to attending black religious services. In this way, the city becomes our classroom as we bring back the knowledge we have gained outside of class making each other aware of the different perspectives of community leaders, artists and/or scholars that we may not have otherwise engaged.

What is your favorite aspect of teaching at CSU?
Teaching African American history as a General Education requirement is what I most adore about teaching at CSU. Teaching black history is a profoundly human and political project, and teaching it as a core requirement to diverse groups of Ohioans requires careful navigation of material as white students must be motivated to acknowledge the inhumanity of slavery and Jim Crow while at the same time black students must witness the histories of racial violence alongside their white classmates. A large number of white students resent the General Education requirement, and black students often feel beleaguered – if not re-victimized — by the material. Over the years, I’ve guided white and black students alike through topics from the Middle Passage to Kwanzaa in ways that generate students’ tears, laughter and dreams – or what historian Vincent Harding named as his goal for black history in 1970 — the “Black creativity, Black hope” that offered “an entirely new understanding of ourselves and our surroundings.”
With the end of the tenure of our first black president and the re-emergence of a social movement around issues of police brutality and enduring racism, I am humbled by the role I am asked to play as a public educator. To quote the late Grace Lee Boggs “historians of the black experience” have a responsibility to “develop a common understanding of the important role that the black struggle for human rights has played through the years not only to advance blacks but also to humanize this country.”

What advice would you give a student interested in becoming a Social Studies teacher?
Like your students and follow your passion. Think broadly, but study deeply. Once you land on the particular questions that move you, research them thoroughly. That immersion is what will propel the excitement for learning that will shepherd you through the variety of pedagogical and technological techniques you encounter in your training. I have always taken to heart theorist bell hooks’s observation that education is the practice of freedom – that to educate is not merely to share information, but to share in the intellectual growth of our students.