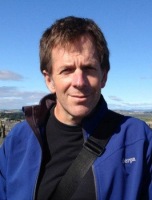 Posted on March 7, 2018 by Shelley Rose Posted in Events, Topics

Join Dr. Thomas Humphrey as he presents “Life and Death in the British Mainland Colonies, 1585-1776” for the Cleveland Humanities Festival on March 27 from 6-7 pm. The lecture will take place in CSU’s Drinko Hall and is free and open to the public.
Abstract:
Tisquantum embodies nearly all aspects of life and death
in the British North American mainland colonies before
1776. As an indigenous person, he and his kinfolk suffered
high, sometimes catastrophic, death rates from European
diseases. As an inhabitant of what became New England, he
and other New Englanders were more likely to live longer than
their cohorts in other regions. As a man, he stood a greater
chance of living longer than a woman because he avoided
the life-threatening cycle of pregnancy, birth, and lactation
that nearly every woman endured. And as a person who was
at one time enslaved, he faced the likelihood of early death
from hard work, exposure, malnourishment, and violence
against a body he no longer owned. In that way, Tisquantum
represents two demographic histories – of native Americans
and of English colonists. Using Tisquantum as a starting
point, this talk brings together those themes to describe how
people lived and died in that portion of North America that
became, later, the United States.